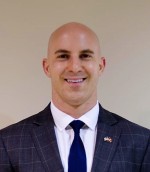 Chris Davis is presently a rising third-year law student and active-duty Marine Corps Officer attending school via a unique educational program offered by the Department of the Navy. Prior to matriculating, he graduated (with distinction) from the Army’s Captain Career Course following a successful Company Command tour. He is a graduate of the U.S. Naval Academy and holds a Masters Degree in Management & Leadership.

“I do not have superior intelligence or faultless looks. I do not captivate a room or run a mile under five minutes. I only succeed because I am still working after everyone else has gone to sleep.” – Sir William Slim

Arguably there is no other profession that requires a more scrupulous level of analytics and research than the law. Developing legal theories and satisfying procedural requirements traditionally restricted an attorney’s movement in his individual office spaces or legal library resource areas. Recent technological advances have brought all necessary work resources to one’s desk (or house, even). What time has been gained by the practitioner has chipped away from critically important socialization.

The military is not free of this troubling phenomenon. The younger generation of leaders, reliant on finger-tip technology, has met with the scorn of the members of an elder recruited cohort who remember a life absent the dependence on PowerPoint or Outlook.

As I typed away furiously on my computer, I could hear rain rolling down the window of my office. As a Company Commander, my immediate thought was of my Marines’ well-being. While I appreciated the challenge that the weather conditions would impose on their training, I hoped our planning considerations had adequately covered this circumstance. As lightning cracked in the background, I heard a knock on my door.

Standing there was my Company First Sergeant. He was a senior-enlisted Marine and advisor on my immediate staff, who had spent twenty-plus years in the Marine Corps fighting in the toughest climes in two different wars. With the calm respectful tone of a fatherly figure, he explained that we needed to get out and see the Marines. Adding, “Sir, you can pretend to care; but you can’t pretend to be there.” I grabbed my gear and stepped out to be with my Marines.

In the military, the success of a mission is wholly dependent upon relationships. Heroic deeds are repeatedly performed by soldiers willing to sacrifice themselves for those whom they have developed an adoration. In an extreme way, this image demonstrates the importance of building relationships. These associations cannot be forged from exchanging phone calls, text messages, or e-mails. Personal interaction is critical.

As a leader, make time in the day to “troop the line.” Have designated lunch time or swing by each office to genuinely gauge the status and well-being of your associates. Refrain from sending an e-mail when walking down the hallway will not impede the message. Most especially if the correspondence will have a negative connotation. Exhibiting honest concern through personal interactions, where emotion and intention can be plainly understood, builds a team willing to sacrifice together. Being present and seen, in the good, but more importantly, when the storm clouds roll-in, is vital to being an effective leader.